Good coaches are not measured or remembered based so much on a winning season as the impact of their life philosophy and the standards they pass on to the young people going through their program.

Coaches need to understand the reasons why they coach. They also must understand the attributes that make a good coach. One way to do that is to compare and contrast a wide variety of coaching styles in order to develop a personal coaching philosophy that works for them and their kids.

Pat Summitt, the former coach of the Tennessee Vols women’s basketball team, is perhaps best known for winning more games than any other NCAA Division 1 basketball coach, male or female. She once said: “I’m someone who will push you beyond all reasonable limits. Someone who will ask you not to just fulfill your potential but to exceed it. Someone who will expect more from you than you may believe you are capable of.”

The great UCLA basketball coach John Wooden described a coach as “someone who can give correction without resentment.” He also said: “Success is peace of mind which is a direct result of self-satisfaction in knowing you did your best to become the best you are capable of becoming.”

So now it is your turn. What is your coaching philosophy?

What makes a successful coach? 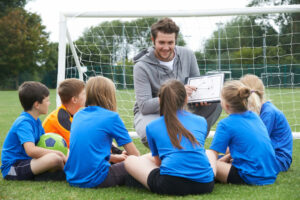 Communication and motivation are essential aspects of the job because what coaches are really supposed to be doing is preparing young athletes for successful lives beyond the playing field or the swimming pool.

The best coaches build great athletes, but also great scholars and good citizens. Like inspirational teachers, they are not forgotten.

Most coaches lean toward one of three coaching styles: the command style, the submissive style, or the cooperative style. In the command style of coaching, the coach makes all of the decisions. The role of the athlete is to respond to the coach’s commands. … The athlete’s role is to listen, to absorb, and to comply.

If that is your style, it might be time for a refresher course. 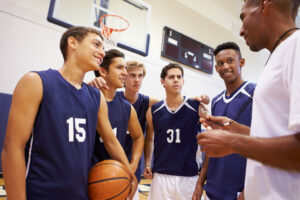 To get there requires some self-examination and answering some key questions.

For example, do you have any problems with the philosophical foundation of “athletes first, winning second”?

In your opinion, describe the coaching style that would be the best in helping your athletes become “complete citizens” while still fulfilling the goals of the school’s athletic program.

An example from coach.ca goes like this: “My coaching philosophy stresses the importance of accountability, responsibility, team unity, discipline, mental toughness, self-confidence, sportsmanship, and a desire to compete (values). My teams are characterized as very disciplined, sportsmanlike (leadership style) and highly motivated to put in an intense effort on the floor every practice and game.”

If you are new to coaching or perhaps in need of a refresher course resources are available.