Spaceship takes off into space. Rocket flies on a background of the starry sky

The need to explore has always been at the heart of human existence. From Magellan and Captain Cooke to the Mercury Space Program, humans have always felt the need to explore – to find out what is over the horizon.

For over millennia, human ventures have led to navigating the seas, discovering new lands, conquest of the skies and, now, the exploration of space. But why? What’s the point?

What gives us that urge to go off into the great unknown, to climb Everest or land on the moon or explore Mars?

According to the Merriam-Webster Dictionary, to explore is to “conduct a systematic search or to travel over new territory for adventure or discovery.” 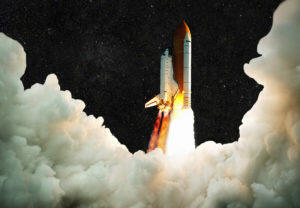 Throughout human history, people who wanted to explore have led the spread of civilization. Ancient voyagers included the Phoenicians, whose tin artifacts indicate they may have traveled as far as Britain. The Carthaginians explored the western coast of Africa. Greek travelers were the first to circumnavigate Britain and explore what is now Germany.

Among the greatest early explorers were Chinese mariners six centuries ago. A massive armada of nine-mast ships navigated west to Ceylon, Arabia and East Africa.

From navigating the seas and lands, humans began to explore the sky with the invention of the airplane.

That would lead to humans looking beyond the atmosphere.

The history of exploration took the next logical step –- venturing into outer space. The new explorers of the 20th century embraced the sentiment of Russian space pioneer Konstantin Tsiolkovsky.

“The Earth is the cradle of humanity,” he said, “but one cannot live in a cradle forever.”

According to NASA, there are myriad reasons to explore space. Space not only sheds light on who we are as humans and where we come from, but also whether we are alone in the universe. Are there other habitable planets? Are there other life forms? Perhaps they are more advanced and can cure our common diseases. Probing the galaxy in search of these answers allows us to constantly continue our research.

Space exploration is our final frontier and by far the most daunting yet for explorers.

Analyzing our world is also intriguing to students. It allows them to dream. Our present research into Mars is a perfect example.

One such course uses a TED Talk book, online TED Talks and web resources to help teachers to understand the importance of the need to explore and to motivate students to become life explorers.