While Mark Zuckerberg testifies before the U.S. Congress about data theft and its impact on U.S. elections and Tesla founder Elon Musk has repeatedly talked about the dangers of Artificial Intelligence (AI) in regards to the future of humanity, technology’s impact is evident and growing exponentially.

And it’s about to get really weird and potentially scary.

The rise of artificial intelligence is posing interesting challenges for society, raising questions about ethics in a modern world. If you are a teacher you probably think Snapchat is bad enough. What about the eventual robot takeover? What do you tell the kids?

Sounds crazy, right? Self-driving cars and burger-flipping robots are just the beginning. What about headsets that read brain waves. What about the ability of humans to edit their own DNA?

All true. And for good or ill, it is the reality we face. The late, great physicist Stephen Hawking even warned us from his deathbed.

As a teacher, you need to prepare students for a future of technology that will change humanity. More importantly, students will need to understand the ethical concerns that go along with this rapid technology revolution. 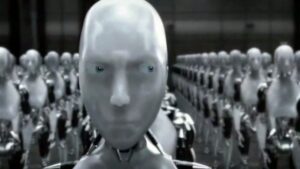 It is imperative that teachers gain new insights into today’s and tomorrow’s technology in order to better prepare students for its effect on humanity.

Technological advancement and its impact on humanity must be addressed to both understand it and know how to reject it. It is as much about understanding technology as it is the balance between scientific advancement and what still makes us human.

If it is impossible to slow down scientific advancement, it is possible to slow ourselves down, which is why “The Art of Stillness” by Pico Iyer is recommended reading. In an accelerating world, the TED book paints a picture of why so many—from Marcel Proust to Mahatma Gandhi to Emily Dickinson—have found richness in stillness. Ultimately, Iyer shows that, in this age of constant movement and connectedness, perhaps staying in one place is a more exciting prospect, and a greater necessity than ever before.

A series of TED Talks are recommended for teachers. By viewing these talks, teachers can grasp what they are dealing with and better prepare themselves and their students for the effects of technology.

Teachers should check out these three TED Talks.

Are you worried about robots coming or are you saying, “I can’t wait”? View the TED Talk “Robots Will Invade Our Lives” by Rodney Brooks

Are you familiar with CRISPR technology and concerned about the ethical impacts of altering DNA. View the TED Talk “Editing our DNA” by Jennifer Doudna.

What about headsets that read brain waves? Are you curious how such a headset will change teaching? Tan Le is the founder and CEO of Emotiv, a bioinformatics company. She claims her astonishing new computer interface reads its user’s brainwaves, making it possible to control virtual objects, and even physical electronics, with mere thoughts (and a little concentration). She demos the headset and talks about its far-reaching applications. How might such a headset change teaching.

The future is unwritten

If all this is a bit scary and confusing you might want to check out a professional development course for an introduction and a better understanding of what is coming down the pike and how best to adapt.